Its the middle of the afternoon and you’re sitting on your system struggling with an assignment. You feel like a breather, so you go for a little Netflix break. Half an hour later, you’re now finally sitting down to focus and your phone buzzes a notification from Instagram with the number of likes you’ve got on your last post, you’re jumping with joy! By now, of course, its teatime and you’re craving a snack so you order in from KFC because who wants to resist the temptation of a delicious fat fried burger…

If this sounds familiar to you, you can let go of the guilt trip. We’ve all been there.

Whether its binge-watching shows, indulging in gluttony, obsessing over validation on social media or even smoking 10 packs of cigarettes a day; the fact is that we’ve become victims of our own poor habits and puppets of this happy chemical, called Dopamine, ruling the world over.

Here’s how it works. Dopamine essentially seduces the brain to take action by creating the illusion of a ‘do or die situation’. But its not dopamine that’s the bad guy! Dopamine, after all, is only a pleasure chemical that stimulates our action. It’s the lack of self-discipline that has made us lose control on multiple levels resulting in self-sabotaging behaviours amongst other problems.

Ironically we miss recognising that the blind conformance to dopamine too comes at a cost, the cost of stress. According to Fitness expert, Michael Matthews, stressful situations trigger our arousal to get our hands on a ‘reward’ (a cheat meal) further tempting us to get more rewards (more cheat meals), which only leads to guilt thus more stress and before we know it we’ve created an on-going loop of disaster for ourselves!

The good news is that there is a way out for dealing with the never-ending enticing overload of cravings and trusting our inner ability to stick through better choices. Here’s how:

Slow down– The nature of our lifestyles may not always allow us to do this but attempting to pause can really simmer down the famous monkey mind. Also, research suggests that deliberately showing down your breathing for 10-15 seconds/ breath increases heart rate variability which helps strengthen willpower. How about that for a hack!

Observe your urges – When stress calls for wanting to reach out to a chocolate cake or tuning in your Xbox, shut your eyes, isolate yourself for a few minutes and figure out what’s going on internally. Without attaching yourself to reasons or your reactions, ask yourself how you can best deal with the situation at hand rather than distracting yourself with something you think will solve the problem. When you get to the bottom of the core need, you give yourself permission to let go of the addiction.

Think Big Picture– One way to deal with the willpower dilemma, is to think about ‘how is this serving me in the long run’? Luckily right from school, I’ve had fairly strong self-control and have never had trouble turning down alcohol at parties, particularly Delhi’s social scenes! I do have a weakness for sweet delights however. So every time I’m tempted to indulge in more chocolate than I should, I reflect on how will this impact my long-term fitness goals and my urge suddenly disappears.

Applying the same rule, if you often find yourself under pressure to have shots shove down your throat every time you’re out, consider your liver and question if you really want to end up damaging it through frequent and excessive consumption and if that nasty hangover the following day will be really worth it?

Replace your ‘Routine’– If none of the above appeal and you’ve made it a mission to be an obedient servant to your brain’s desires then perhaps focus on creating healthier routines. In The Power of Habit, Charles Duhigg illustrates the three-step process of building habits. It takes a cue (your urge to smoke), a routine (the act of smoking) and a reward (the feel-good factor). The trick is to replace the routine with something else that will still offer the same reward of feeling better/calm/relaxed etc. Revisiting my own case- every time I crave chocolate I now resort to dates and that still satisfies my sweet tooth!

Your task is to figure out a routine that will work for you. 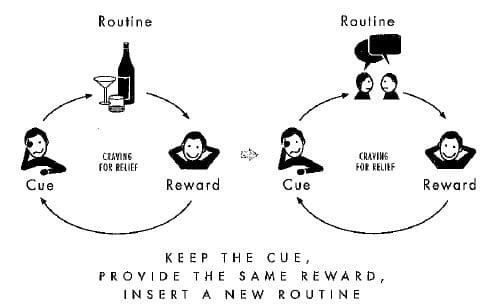 (The above image illustrates the Habit loop. If you notice, the cue and the reward (relief) in both cases remain the same. The change lies in the routine. It is how Alcohol Anonymous (AA) functions. By simply offering a supportive peer group system to talk through anxiety instead of having addicts turn to alcohol, AA has been able to help as much as 10 million alcoholics achieve sobriety!)

In summary, re-visit all your little choices you make in the day that lead to becoming habits. You may just be able to create a deeper sense of awareness and a greater understanding of your unfulfilled needs while cracking the strategies that work best for you.

You have a choice. Either you let little impulses dictate you OR you become the master of your mind and the captain of your own journey called life.

Whichever you choose, make sure it serves well.